"Ballad Of The Tempest" by James Thomas Fields

This beautiful, narrative poem was first published in 1849 in a volume titled "Poems", just a few years after James Thomas Fields became a partner in a Boston publishing firm. Several of Fields' works reference the sea which may have been due to the fact that his father was a sea captain, although he died when Fields was quite young. After James Thomas Fields' death in 1881 at the age of 63, two of Fields' contemporaries, Henry Wadsworth Longfellow and John Greenleaf Whittier, wrote poems in his memory. 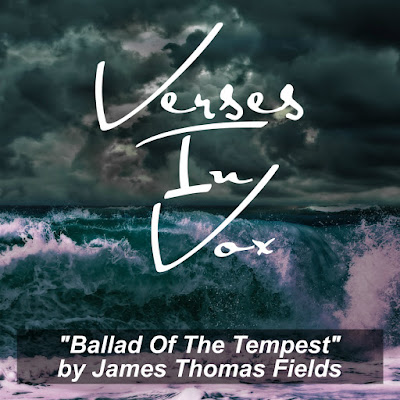 
Ballad Of The Tempest by James Thomas Fields

WE were crowded in the cabin,
Not a soul would dare to sleep,--
It was midnight on the waters,
And a storm was on the deep.

'Tis a fearful thing in winter
To be shattered by the blast,
And to hear the rattling trumpet
Thunder, "Cut away the mast!"

So we shuddered there in silence,--
For the stoutest held his breath,
While the hungry sea was roaring
And the breakers talked with death.

As thus we sat in darkness
Each one busy with his prayers,
"We are lost!" the captain shouted,
As he staggered down the stairs.

But his little daughter whispered,
As she took his icy hand,
"Isn't God upon the ocean,
Just the same as on the land?"

Then we kissed the little maiden,
And we spake in better cheer,
And we anchored safe in harbor
When the morn was shining clear.