"To Be A Pilgrim" by John Bunyan

This poem was originally published in 1684 in Part 2 of the well-known allegorical novel that Bunyan wrote, The Pilgrim's Progress. The text was later modified and set to music in the early 1900s and sung as a hymn in churches. There are a few textual variations of the piece and it has also been known under several different titles including, "He Who Would Valiant Be" and "The Pilgrim". We have chosen to use the original text for this reading. 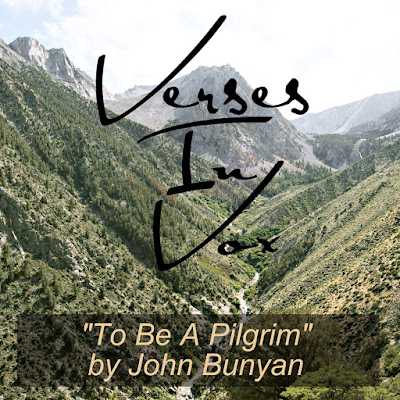 "To Be A Pilgrim" by John Bunyan

Who would true Valour see
Let him come hither;
One here will Constant be,
Come Wind, come Weather.
There's no Discouragement,
Shall make him once Relent,
His first avow'd Intent,
To be a Pilgrim.

Who so beset him round,
With dismal Storys,
Do but themselves Confound;
His Strength the more is.
No Lyon can him fright,
He'l with a Gyant Fight,
But he will have a right,
To be a Pilgrim.

Hobgoblin, nor foul Fiend,
Can daunt his Spirit:
He knows, he at the end,
Shall Life Inherit.
Then Fancies fly away,
He'l fear not what men say,
He'l labour Night and Day,
To be a Pilgrim.

Email ThisBlogThis!Share to TwitterShare to FacebookShare to Pinterest
Labels: audio, J.D. Sutter, John Bunyan
Newer Post Older Post Home
Want to suggest a poem for us to produce? Please email us at verses@porchlightfamilymedia.com.