American poet, Henry Wadsworth Longfellow, wrote "The Children's Hour" about his relationship with his own three daughters, even using their names in the piece. It was first published in 1860 in the Boston-based magazine, The Atlantic Monthly. Subsequent publishings were often accompanied by a portrait of the three girls. The poem is a beautiful look at a father's love for his children, but also contains the bittersweet tones of the realization that the childhood years are fleeting. 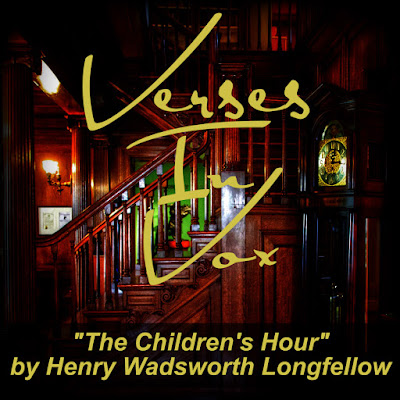 
Between the dark and the daylight,
When the light is beginning to lower,
Comes a pause in the day's occupations,
That is known as the Children's Hour.

I hear in the chamber above me
The patter of little feet,
The sound of a door that is opened,
And voices soft and sweet.

From my study I see in the lamplight,
Descending from the broad hall stair,
Grave Alice, and laughing Allegra,
And Edith with golden hair.

A whisper, and then a silence:
Yet I know by their merry eyes
They are plotting and planning together
To take me by surprise.

A sudden rush from the stairway,
A sudden raid from the hall!
By three doors left unguarded
They enter my castle wall!

They climb up into my turret
O'er the arms and back of my chair;
If I try to escape, they surround me;
They seem to be everywhere.

They almost devour me with kisses,
Their arms about me entwine,
Till I think of the Bishop of Bingen
In his Mouse-Tower on the Rhine!

Do you think, o blue-eyed banditti,
Because you have scaled the wall,
Such an old mustache as I am
Is not a match for you all!

I have you fast in my fortress,
And will not let you depart,
But put you down into the dungeon
In the round-tower of my heart.

And there will I keep you forever,
Yes, forever and a day,
Till the walls shall crumble to ruin,
And moulder in dust away!