"The Long Hill" by Sara Teasdale

American lyric poet, Sara Teasdale, was born in 1884 in Missouri. She published her first poem in a newspaper in 1907 followed by a volume of her poetry later that year. In 1950, science fiction writer, Ray Bradbury published a short story which contained Teasdale's poem, "There Will Come Soft Rains" and Bradbury also used that as his story's title. Many of her poems have been put to music over the years, including "The Long Hill" which was recorded by the band Clifford Grooms in 2013. 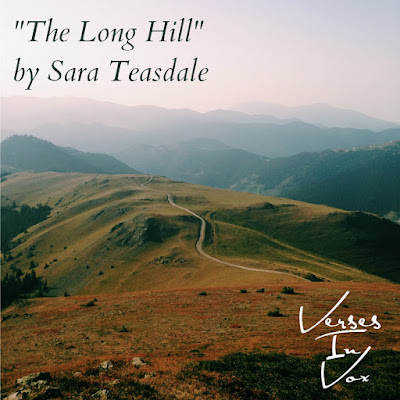 
"The Long Hill" by Sara Teasdale

I must have passed the crest a while ago
And now I am going down —
Strange to have crossed the crest and not to know,
But the brambles were always catching the hem
of my gown.

All the morning I thought how proud I should be
To stand there straight as a queen,
Wrapped in the wind and the sun with the world
under me —
But the air was dull, there was little I could
have seen.

It was nearly level along the beaten track
And the brambles caught in my gown —
But it's no use now to think of turning back,
The rest of the way will be only going down.

The team shares their thoughts on this poem


"I found myself looking back at the last 7-13 years and felt that longing, but also a certain relaxed (resigned?) sense of self as I head into the upcoming years. It wasn't a negative feeling, but more of an, 'Ah, so this is it! Okay. I'm alright with this!'" - Laura Richcreek, narrator


"I think it has a feeling of bittersweetness. Sort of a bit of longing for days gone by, but at the same time realizing that the past is gone and one must look ahead. Then there's also a hint of apprehension about what is to come. I suppose it could also be interpreted as a look at aging and maturity too. I think it has so many layers to it despite how short it is. It really is quite a beautiful piece." - J.D. Sutter, director

Email ThisBlogThis!Share to TwitterShare to FacebookShare to Pinterest
Labels: audio, Laura Richcreek, Sara Teasdale
Newer Post Older Post Home
Want to suggest a poem for us to produce? Please email us at verses@porchlightfamilymedia.com.