"The Charge of the Light Brigade" by Alfred, Lord Tennyson

Written and published in the winter of 1854, "The Charge of the Light Brigade" memorializes the story of the British soldiers who fought in the Battle of Balaclava during the Crimean War. The battle, in which the Russian forces had soundly defeated the British, had just taken place less than two months prior when Tennyson wrote this poem. One survivor of the defeated cavalry regiment, the 11th Hussars, Private Thomas Williams, remarked later in a letter to his parents, “I could see what would be the result of it, and so could all of us; but of course, as we had got the order, it was our duty to obey. I do not wish to boast too much; but I can safely say that there was not a man in the Light Brigade that day but what did his duty to his Queen and Country.”[1] Tennyson later edited the poem and included the new version in a volume of works published in 1855. The revisions were not well received so he restored the text back to its previous iteration for subsequent printings. We have chosen to produce the original and more well-known version of this poem. 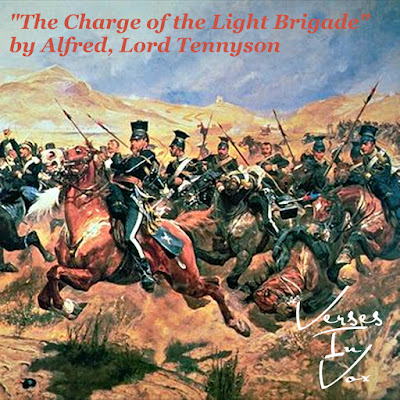 
"The Charge of the Light Brigade" by Alfred, Lord Tennyson

II
“Forward, the Light Brigade!”
Was there a man dismayed?
Not though the soldier knew
Someone had blundered.
Theirs not to make reply,
Theirs not to reason why,
Theirs but to do and die.
Into the valley of Death
Rode the six hundred.

IV
Flashed all their sabres bare,
Flashed as they turned in air
Sabring the gunners there,
Charging an army, while
All the world wondered.
Plunged in the battery-smoke
Right through the line they broke;
Cossack and Russian
Reeled from the sabre stroke
Shattered and sundered.
Then they rode back, but not
Not the six hundred.