"The Crucifixion and Resurrection. An Ode." by Mary Leapor

Mary Leapor was a young poet born into Britain's working class. She died at the young age of 24 and therefore her body of work is not very large, but it contains some lengthy pieces which are quite respected and have received much acclaim to this day. Published posthumously in 1748, "The Crucifixion and Resurrection. An Ode." is a beautiful and vivid depiction of Christ's death, burial, and resurrection. Leapor recounts this event in her signature style and the poem's first three stanzas seem to focus on the effect Jesus' death had on the natural world and then in the second half she shifts to show what His resurrection means to humanity. 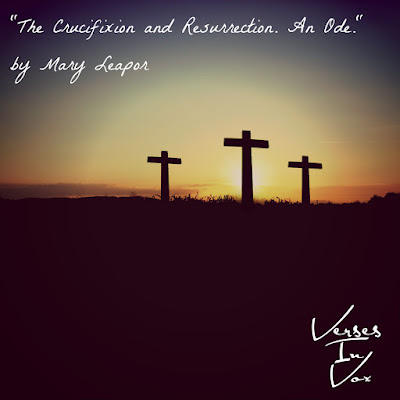 NOTE: We could not locate a royalty-free image of Mary Leapor to include in this post.

The Crucifixion and Resurrection. An Ode. by Mary Leapor

I.
What means the reeling Earth? O why
These Wonders in the dreadful Sky?
The frighted Sun withdraws its Beams,
Deep Groans are heard and doleful Screams.
O say, what this Convulsion means:
Afflicted Nature with a Shriek replies,
A God expires, a mighty Saviour dies.

II.
The conscious Stars their Rays deny.
The Moon receives a crimson Dye.
The Temple conscious of its Fall,
Now shakes its emblematick Wall.
The Ocean stagnates, and the Mountains bow,
And Angels weep that never wept till now.

III.
Still tremble, Earth, and still, O Sky,
Thy ever-chearing Lamps deny:
Amaz'd still let the Ocean stand,
But what remains for guilty Man?
What Groans? what Sorrows are for him decreed?
For Man whose Crimes have made Perfection bleed?

IV.
But see, O see, the Sun returns!
No more afflicted Nature mourns!
The Stars their vacant Orbs regain!
And the Moon sheds a silver Beam!
While heav'nly Voices warble in the Skies,
"Behold your Saviour from his Tomb arise!"

V.
While Saints attend the blessed Morn,
He rose: — The God in human Form,
A Form not made of vulgar Clay:
Which, tho' it slept, cou'd not decay!
Hail, Mortals; Hail (transported Seraphs cry)
Redeem'd, and favour'd by the God most high.

VI.
In Heav'n let Joys eternal flow,
And Mercy in the Worlds below;
The Penitent shall Peace obtain,
And not a Tear shall fall in vain.
Then join, ye Worlds, in one glad Chorus sing,
Praise to Messiah, and th' Almighty King.

Email ThisBlogThis!Share to TwitterShare to FacebookShare to Pinterest
Labels: audio, Laura Richcreek, Mary Leapor
Newer Post Older Post Home
Want to suggest a poem for us to produce? Please email us at verses@porchlightfamilymedia.com.