"Autumn Fires" was first published in 1885 in a volume titled Penny Whistles which contained over 60 poems, including "My Shadow", "The Lamplighter", and "The Land of Story-books". The collection was later re-titled A Child’s Garden of Verses and has been reprinted many times. Robert Louis Stevenson is, of course, well-known for his short stories and novels, such as the pirate adventure story, Treasure Island, which was published two years prior to the aforementioned poetry collection. 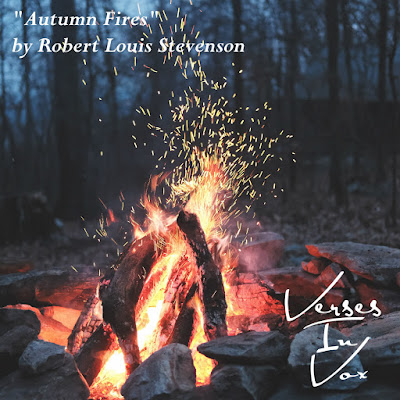 Entry on Wikipedia for Robert Louis Stevenson
Stevenson's Bio on the Poetry Foundation
Short Commentary on "Autumn Fires" by the Blog, Pluck That Poem
Blog Post by Christine A. Lindberg About Autumn Poetry

In the other gardens
And all up the vale,
From the autumn bonfires
See the smoke trail!

Pleasant summer over
And all the summer flowers,
The red fire blazes,
The grey smoke towers.

Sing a song of seasons!
Something bright in all!
Flowers in the summer,
Fires in the fall!

A high-quality scan of the page containing this poem from a volume of A Child's Garden Of Verses courtesy of The Internet Archive. You can download a copy or view the book in a browser here.